Ab Workout and Fat Loss Mistakes You Must Avoid

If you want to discover some areas where you may be going wrong in your ab workouts and your attempts at losing stomach fat, I have an interview for you here that you’ll want to read.

In the interview, we discuss the topic of abs training and the biggest myths and mistakes we see in this field.

Here’s a copy of the training portion of the interview below. We’ll discuss the nutrition aspects necessary for losing enough body fat to carve out those six pack abs in another article. 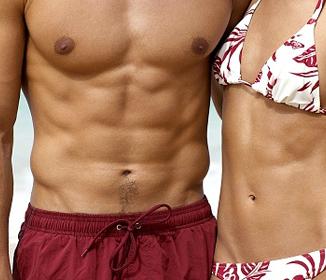 CB: Okay Mike, so where does the average man or woman go wrong when it comes to training abs?

MG: Most people are probably going to be surprised with this answer. In their quest for ‘six pack abs’, the biggest mistake I see people making is wasting WAY too much of their time training their abs directly… pumping away with all kinds of different abs-specific exercises.

I’m sure you know what I’m referring to. The person is trying so hard to get those abs to show, that they’re spending almost all of their time in the gym with hundreds of reps of various crunches, leg raises, twisting exercises, etc. Meanwhile, all of that wasted time directly training the abs could have been better spent on a properly designed full body workout program that would elicit a much better metabolic response and increase the fat-burning hormone levels in their body as well.

After all, losing the stomach fat that is covering the abs is the MOST important aspect for most people to finally be able to make their abdominals visible. Unfortunately, pumping away with hundreds of crunches and leg raises does NOT cause much of a metabolic or fat burning hormonal response.

This is the main focus of my Truth about Six Pack Abs book… full body workout programs and proper nutrition to strip off that stubborn belly fat and reveal the six pack that’s hiding underneath!

Of course it wouldn’t be an abs book if I didn’t focus on ab development too, but I make sure firstly that the most important concepts for lasting body fat reduction are understood.

However, in regards to mistakes I see between genders… Yes, I tend to see women more often are deathly afraid to use weight training with anything but really light weights. That is a shame, because THE most effective way to gain control over your body fat for life, is to maximize your lean muscle that your body carries, as well as working that muscle hard through intense resistance exercise regularly.

It’s important for women to realize that regular strength training using heavier resistance will NOT “bulk them up” (as long as caloric intake is controlled), but rather is one of the key secrets for losing body fat and staying lean year-round. As a matter of fact, some of the leanest females that I’ve trained over the years are the ones that aren’t afraid to work hard with the weights.

I also notice that most women (and a lot of guys too) spend way too much time with slow cardio workouts. This is simply not necessary, and the way I combine high intensity resistance training into full body routines provides enough of a “cardio” workout in itself usually. We’ll get back to this in a minute though.

CB: What about old school sit-ups? Do you use these? Are they good, bad, or does it “depend”?

MG: Sit-ups are a controversial topic. I don’t think they’re good or bad per se, but rather “in between”. I didn’t include them in my workout programs. I simply don’t feel they are necessary, and I think there are much more effective abs exercises to focus on. Personally, I almost never do sit-ups except occasionally for a little variety every now and then.

CB: Give us a weekly sample ab training program. How many days per week? What are a couple of the best exercises you’d pick? How many sets? Reps? Rest?

MG: Well, first I’d like to point out that the full body exercises that make up the majority of my programs indirectly work the abs and the entire “core” area to a fairly decent extent. However, I do include abs-specific exercises into the routines generally about twice per week. The “abs-specific” portion of the workouts generally only take about 5 minutes at most with very little rest between exercises.

Once people are past the beginning phase of gaining some initial ab strength, I try to get them away from the exercises that are too easy, where someone can do 50 or 100 reps, as is frequently common with standard crunches. Instead, I like to focus on higher resistance exercises that actually stimulate the muscle fibers to a much greater degree.

One example of a higher resistance abs exercise is hanging leg raises with a proper “pelvic curl up”. It’s funny but usually someone that has been wasting so much time with hundreds of reps of crunches can usually only do a few solid reps when they first attempt some of these higher resistance exercises.

We also make sure not to neglect some rotational movements, as well as some work for the deeper muscles like the transversus abdominis.

CB: What do you use for burning fat, intervals or slow cardio workouts? Or both? Any gender differences here? Or differences between fitness levels (beginner vs. advanced)?

MG: In most cases, my answer is definitely intervals… or as I like to call it “variable intensity training”. In general, I think slow steady pace cardio is a waste of time, especially if the goal is lasting fat loss.

I think people need to get away from this thinking about “fat burning zones” and calories burned during the actual workout, and look at the bigger picture of what you’re doing in your workout to stimulate the greatest metabolic response in your body… and the best metabolic and hormonal response is achieved through variable intensity training and strength training, not slow steady-pace cardio workouts.

Now I will say that if someone is really deconditioned and can’t handle higher intensity exercise routines just yet, this still doesn’t mean that they can’t simply use lower intensity routines, but still use it in a “variable intensity” fashion, by alternating between higher and lower exertion levels throughout the workout.

That wraps up the “abs training” portion of the interview. We’ll discuss the nutrition aspects that are necessary for losing enough body fat to get visible six pack abs in a separate article.

If Fast Food is a Must, Make the Healthiest Possible Choices

Does Hoodia Work for Weight Loss, or Just Empty Your Pockets

One of the Key Secrets to Life Long Leanness